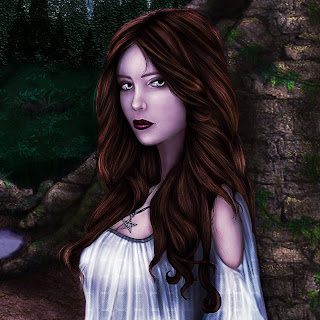 Gaviyn Hartford was last reborn in 1132. He was orphaned and lived on the streets. Some people took pity on him and gave him scraps of food when they could, but Gaviyn had no trouble stealing to stay alive. He survived on his own until he was a young man. It was then that he met a beautiful young lady by the name of Caroline Haley-another incarnation of Carmen Heathers. He was 18 and cleaning stables in exchange for a bed to sleep in and a few coins a week. She was the daughter of a wealthy family, and her father was ready to offer her up to the highest bidder. Gaviyn knew he'd never have a shot, but he had to try. Stealing his employers best horse and trading all his belongings for as much money as he could, he made his offer to Carmen's father.

Of course, his bid was nowhere near enough. The highest bidder, a handsome man in his late twenties named Alvin Imosara, won her hand. Gaviyn was devastated, but his misery had only begun. Caroline defied her father and snuck off to meet Gaviyn, intending to run off with him. But Alvin found out about their plan. Furious with her rejection, he convinced his grandmother-Dahlia Imosara-to attack the Haley family. When Caroline met with Gaivyn, Alvin intercepted. Gaviyn was beat nearly to death, then was forced to watch as Alvin ceremoniously killed Caroline, condemning her soul for all eternity to never find true happiness in love.

As Gaviyn bled to death from his many wounds, he made a deal with whatever deity would hear him that if he could be spared, he vowed to spend his life-however long he had left on the Earth-protecting and watching over his love. It was the Goddess Hecate that heard his plea. In Her infinite wisdom, she turned Gaviyn into a vampire, immortal and powerful. His love for Caroline warmed the Goddess' heart, and she blessed him with eternal life, which he would spend tracking down the each incarnation of his Caroline.

He first took his revenge on the Imosara family, decimating them during the great battle and taking great pleasure in drinking every last drop of Alvin's blood. He then ensured Hanna Haley survived to carry on the lineage, and protected the Haley family for countless generations, all the while tracking down each incarnation of his sweet Caroline and watching her life slip away before he could save her. When Caroline's final incarnation was that of Carmen, born once again into the Haley family tree, he knew this was his last chance to save the one he loved. When her life was slipping away, he did the one thing he swore he would never do-change her into a vampire.

It was a good thing he did, though. Otherwise, Carmen would have died, The Eradicators would have won, Sanctuary would have been destroyed, and humanity's fate would be uncertain.

Hope you enjoyed meeting Gaviyn, and reading about his past! Join us tomorrow for H Day. Oh, what an awesome post I have in mind for H!!